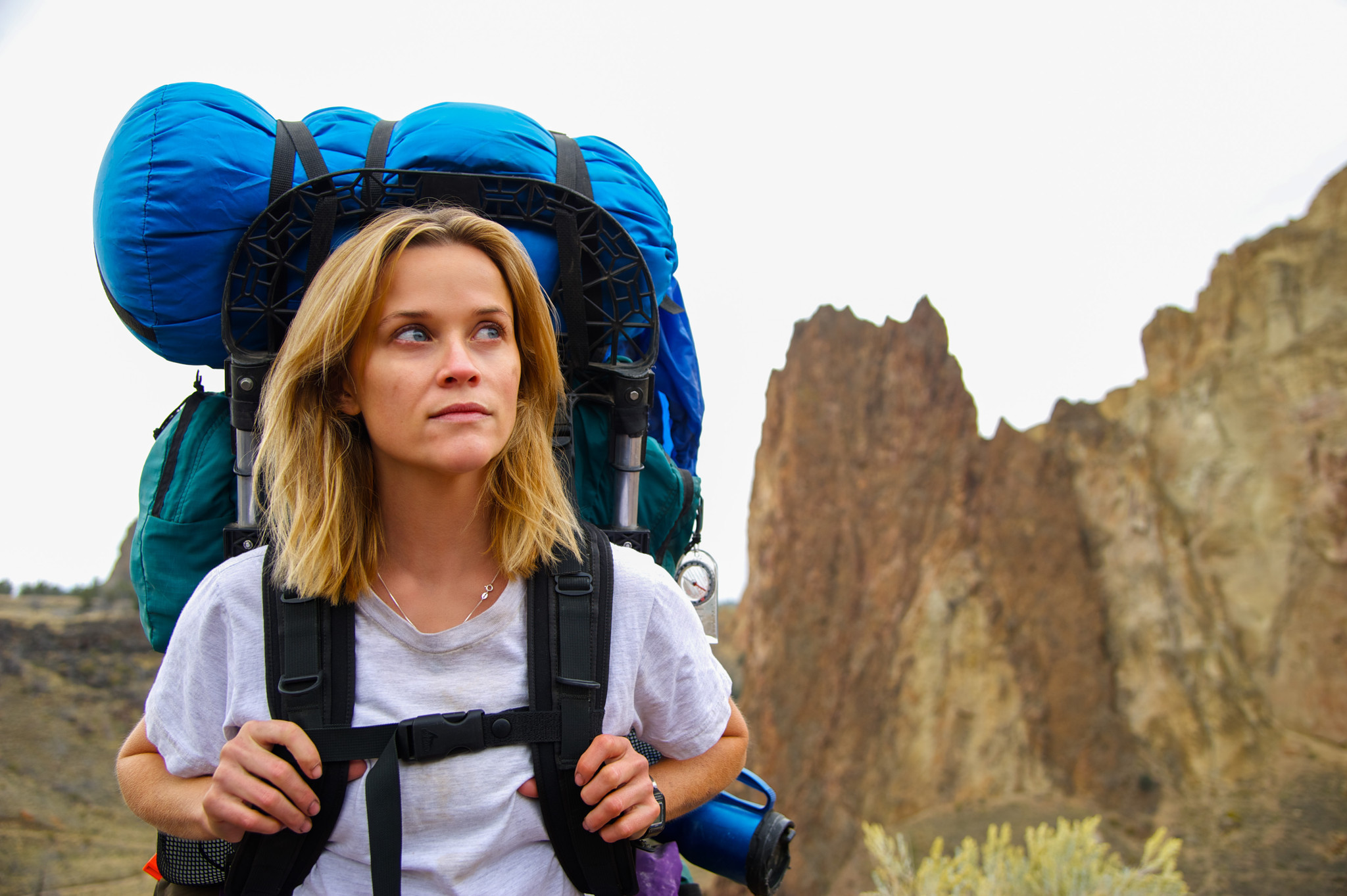 Wild teaches us very many life lessons. If you are an attractive female, anybody will help you on a long hike. If you’re an average looking male, not so much. Wild is Jean-Marc Vallée’s follow up to his Awards-hit Dallas Buyer’s Club and I gotta say, having those two films on your resumé is a good problem to have. But a movie like this rests entirely on the strength of the main actress. Luckily, Reese Witherspoon decided to bring her A-game for this one.

Just in the past couple years, Reese Witherspoon has really started to reignite her acting career. She’s stayed active over the years, but she has done her share of mediocre films. With the exception of Wild and Mud, she has been busy giving us crap like This Means War, Water for Elephants, How Do You Know, and Four Christmases for the past several years. So it is a refreshing change of pace to see actual quality work from her; both in terms of the kinds of films she is acting in and her acting performances in general. It is nice to see a return to the kind of performance that won her an Oscar for Walk the Line.

Wild tells the story of 26 year-old Cheryl Strayed (Reese Witherspoon), a woman who hiked the Pacific Crest Trail in 1995. The trail extends from the US-Mexico border all the way to the US-Canada border. She hiked a portion of it that was over 1,000 miles. She decides to embark on this hike to heal herself after going through some traumatic events like a divorce and the death of her mother. After years of reckless behavior, Cheryl tells herself that she wants to “walk myself back into the woman my mother thought I was.” Simple enough. After the death of her mother, she kind of went into a downward spiral. She was using drugs and having sex with pretty much anyone; years of destructive behavior. And we see her rookie hiking failures as she first starts. As she goes on, we see what led to all of this in flashbacks, involving her mother Bobbi (Laura Dern) and her ex-husband Paul (Thomas Sadoski).

Wild isn’t the first film of its kind and it won’t be the last. It is a “find yourself while struggling” drama which is kind of what films like Into the Wild are. It isn’t something completely brand new because we’ve seen it done before, but it still didn’t stop me from liking it. It has aspects that are done really well and some aspects that weren’t as good.

The acting is phenomenal. It is understated and not some grand, overly-emotional performance. It is subtle and you can see the deterioration and building up of Witherspoon’s Cheryl. She can tell you everything she is feeling on her face or in her body language. This movie is on her back much like Gravity was on Sandra Bullock’s. Reese can shift from funny to dramatic quite easily as well. Everyone else, an exceptional Laura Dern aside, in this movie are lesser known TV actors, but they are just there to not make Cheryl alone on the whole hike. Dern is fantastic as the mother as well. You see certain scenes and then they are revisited later and you see them in a completely different light. Her character is so free-spirited but she is guarding some dark stuff. A very quiet, yet good acting performance from Laura Dern.

The other key player in this movie isn’t a character at all. The cinematography is gorgeous. The funny thing is that the movie doesn’t spend time focusing on the cinematography much. It doesn’t have long and extended shots of the nature or surroundings. You just see the areas in which Reese Witherspoon is walking and climbing. And it is amazing. Kudos to Jean-Marc Vallée for creating something great without focusing on it. Sometimes, the most beautiful things in life don’t ask for attention. I believe this movie was shot mostly on location, so I wouldn’t be surprised if the PCT turns into an even bigger tourist attraction after this release.

There are some issues I have with it, though. Some of the undertones and themes didn’t need to be driven home in the most obvious ways possible. One of the most suspenseful scenes in the movie happens when she is all alone in the woods when two hunters approach her and definitely are interested in her sexually. But they were so cliché, it’s unreal. They were the stereotypical “hick” hunters. They drank, they spit, and they had the demeanor that you often see in films and TV shows that showcase hunters like this. Plus, some of the philosophical themes didn’t need to be so obvious. I did laugh when she was weary and suspicious of Frank (W. Earl Brown). I knew he was going to be a good guy because it was done in a very obvious way. He had some nice words to eventually say to her, even if they were ridiculously corny. Cheryl even gets to a hikers’ camp soon into the film and one nice guy helps her unload her giant pack of all the non-essentials. I get it. I understand that she needs to release herself from all of things in her life that she doesn’t need. We just didn’t need this scenario to drive it home. But I will admit that seeing her struggle to pick her own backpack up at the beginning when she was starting the hike was pretty damn funny.

The choice of having the narration was an interesting choice as well. I don’t always agree with having a voiceover in films. Sometimes, it paints the image of lazy filmmaking and storytelling, but sometimes it is necessary. I am on the fence on whether or not it was needed in Wild or not, but having the literary references adding nothing to the film for me. I understand that it is based off of a book and I have no idea how close it stays to the subject material, but I can’t help but thinking the random poems that Cheryl spouts off in the movie weren’t needed. It doesn’t establish her as an intelligent character because the flashbacks of her in school did that already. Just a few interesting choices I think weren’t a necessity in this film.

Wild is far from boring. Not much happens, but at the same time, so much happens. It is filled with character growth. It has a running time of about two hours but it doesn’t feel overlong in any way. There have been many tremendous performances this year, but Reese Witherspoon has definitely made her case for this upcoming Oscar season. This film is a great movie to watch if you need to get your ass into gear. No one is going to solve your problems for you. This film shows what it is like to take control of your life and fix your own problems. You pretty much have to help yourself if you want to make things better and this movie helps show that in great detail. While there are certain things that bugged me, overall this is a fantastic movie with a possible career-best performance from Reese Witherspoon, gorgeous cinematography, some great character growth, and just a powerful story that will stick with you long after you’ve seen it.

+: Reese Witherspoon’s performance was most likely the best of her entire career and definitely one of the best female performances of the year. She put her all into the role and it shows. It shows in her face, her body language, and her character transformation.

+: The cinematography. The visuals were breathtaking. The best part about it is that the director didn’t focus on it. It was just there, not looking for attention. It makes me want to go on that hike…minus the tight boots.

-: Some of the creative choices in the film. Narration, literary references, clichés, and on-the-nose themes and undertones.

The Culture Of Now

My view on films as I see them. Take it, laugh, share it, leave it. Above all, enjoy!

Making the world safe for filmgoers since 2002.

Journalism student at the University of Wisconsin-Madison.

The official blog of the Green Bay Packers

All my aimless thoughts, ideas, and ramblings, all packed into one site!

Discussing things that matter. So naturally, its mostly entertainment and sports.

The Art and Craft of Blogging

The latest news on WordPress.com and the WordPress community.